San Marcos, TX – The latest addition to the Philips portfolio of LED luminaires underscores the inherent flexibility of advanced LED design, and the latest in integrated technologies, such as built-in lighting controls and optics that meet exacting LEED light trespass requirements. In addition, PureForm from Philips Gardco features a modern aesthetic and state-of-the-art thermal management with the benefits of LED to deliver up to 65 percent more energy-efficiency over the pulse-start metal halide systems it was designed to replace. 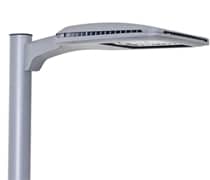 The luminaire itself boasts a profile of less than three inches and a maximized lumen output range of 4,500 lumens to more than 25,000 lumens. Application flexibility is achieved via two different housing sizes and five distinct mountings, including three unique pole mount arms, a mast arm mount and wall mount versions.

As opposed to traditional systems that are either ‘on’ or ‘off’, PureForm offers intelligent controls such as integrated motion response and auto profile dimming. This allows for added energy savings by reducing the luminaire’s power consumption during off-peak hours.

Adding to PureForm cost savings is its ease of maintenance.  Accessing the LED drivers is done by loosening two captive screws, which allow the LED driver compartment to be opened. The LED drivers themselves are on a driver tray which can be easily removed and replaced. Optional tool less access allows entry into the driver compartment, and removal of the driver tray without tools. Access to LED arrays themselves is done by removing two hex-head screws for easy service.  Electrical connections are made via quick disconnect devices.

“As LED technology continues to advance and rival traditional lighting technologies, it is important to understand that advanced controls and optics are critical to meeting today’s stringent lighting requirements,” said Rick Houle, general manager of Philips Gardco.  “Our PureForm luminaire ensures that lighting designers and architects get the aesthetic, light quality and control they want, while building owners and municipalities get the savings from the significant cost reductions in energy use, and maintenance of the luminaire.”

Royal Philips Electronics of the Netherlands (NYSE: PHG, AEX: PHI) is a diversified health and well-being company, focused on improving people’s lives through timely innovations. As a world leader in healthcare, lifestyle and lighting, Philips integrates technologies and design into people-centric solutions, based on fundamental customer insights and the brand promise of “sense and simplicity.” Headquartered in the Netherlands, Philips employs approximately 122,000 employees with sales and services in more than 100 countries worldwide. With sales of EUR 22.6 billion in 2011, the company is a market leader in cardiac care, acute care and home healthcare, energy efficient lighting solutions and new lighting applications, as well as lifestyle products for personal well-being and pleasure with strong leadership positions in male shaving and grooming, portable entertainment and oral healthcare. News from Philips is located at www.philips.com/newscenter.